Send us an Mail

Find A Location Near You

For those already struggling with PTSD, the added stress of the past few months has made managing their symptoms all the more challenging. Additionally, the traumatic experiences of first responders and medical workers who have been dealing with the ongoing situations in the United States on our domestic front lines may prove to have a lasting impact on their mental wellbeing. PTSD is a disorder which has received a great deal of attention, but the way in which it is perceived and treated, especially in light of everything going on currently, is ever expanding and is predicted to play a huge part in the recovery of our nations mental health and wellness going forward.

PTSD affects those who have witnessed or experienced a traumatic event, such as an accident, a death or a particularly shocking or dangerous situation. In addition to combat veterans, police officers, EMTs, fire fighters, medical personnel and sexual assault victims have been shown to be at higher risk for PTSD. 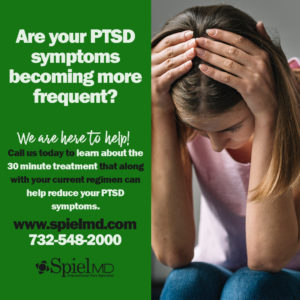 Symptoms can be devastating and life altering and can include unwanted memories, anxiety, depression, as well as behavioral changes which can include isolation, substance abuse, agitation and irritability. These symptoms can make engaging in everyday life difficult or even impossible.

Unfortunately many patients are unable to respond to psychotherapy alone and continue to suffer from symptoms. For these patients, Stellate Ganglion Block has been used alongside cognitive therapy to provide long-lasting relief from PTSD symptoms.

Stellate Ganglion Block is a simple, 30 minute out-patient procedure in which an injection is used to block the sympathetic nervous system. The stellate ganglion block works by reducing the nerve impulses sent to the brain which can trigger symptoms of PTSD to occur. The treatment effectively ‘resets’ the nervous system to its state before the traumatic event which precipitated the onset of PTSD and helps to facilitate further cognitive treatment. As such it is important to note that stellate ganglion block is not a standalone cure for PTSD, but rather aims to improve the therapeutic outcome alongside traditional psychotherapy.

Dr. Douglas Spiel brings more than 20 years of experience in the area of interventional pain alongside his credentials as a board certified radiologist. He has a demonstrated passion for advancing cutting edge treatments and achieving results with even the most challenging cases. If you or someone you care about is suffering from symptoms of PTSD, contact us today at 973-548-2000 or logon to www.spielmd.com to learn more about how a stellate ganglion block can help reduce symptoms and facilitate a more complete recovery from PTSD.